I think there is probably a limit to the number of times I’m permitted to mention That Thing That Happened before I become incredibly annoying, so let me get it out of the way: I only went and won a bloody British Fantasy Award, didn’t I?

The award-winning (!?) story in question is “Looking for Laika”, which was published in Interzone #273 and reprinted in Best of British Science Fiction 2017, and is a story close to my heart for all kinds of reasons, not least of which because it’s a kind of love letter to Laika, the Soviet space dog who was sent into space to die. I’m still astonished, honestly. I never expected that I might win, and I think I might have gone into some kind of shock when Adrian Tchaikovsky called my name out, because I don’t really remember anything that happened between that moment, and sitting back down. Apparently I made a speech, which sounds legit, although I didn’t write a speech because I didn’t think I’d win and I’m not entirely sure what I said (though I do recall yelling at Simon Bestwick to stand up…) 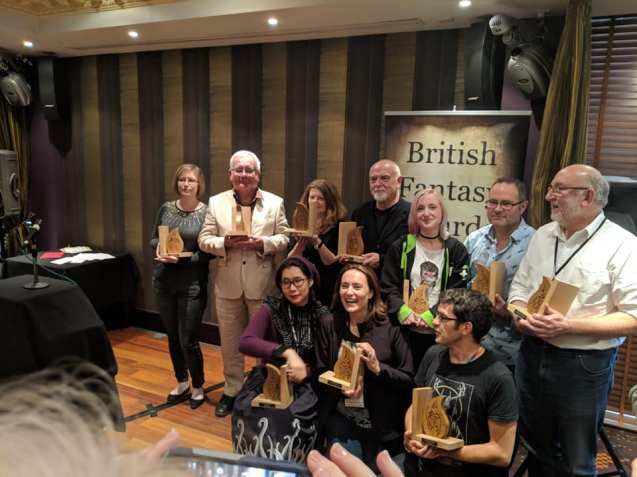 Anyway. That’s a thing that happened. And ironically even though I’m a writer, I’m not sure how to express in words how much it means to me, a vaguely person-shaped ball of anxious, imposter-syndrome infused jelly who has been writing since I was old enough to pick up a pen. Except to say that it means that much more that I was in a room surrounded by dear friends, and respected colleagues, and of course, Mr Mauro. I might never fully be over it, but I promise I’ll stop going on about it, at the very least.

And then there was Fantasycon more generally, which may actually have been my favourite Fantasycon yet. Brilliantly sprawling hotel filled with weird, mismatching statues. Beautiful city. Tons of gorgeous books. And most important of all, wonderful company.

I would do a full con report, but it wouldn’t do any of it justice, and I’d miss people out. So I’ll just say, to everyone I spent time with last weekend, whether we spoke briefly in passing or spent hours laughing, whether we shared a few drinks, or a signing table, or a reading slot, or near enough the whole damn weekend: you are all magical people and you make my world so much better by being in it. Thank you.

2 thoughts on “Thank you, Laika”