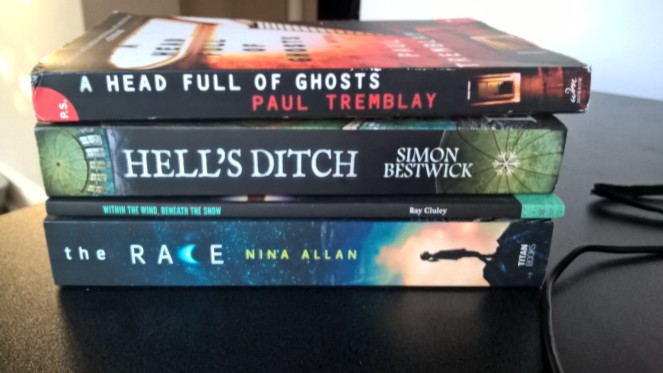 Apparently, my camera decided that Saturday morning is a poor time to actually focus on things.

A Head Full OF Ghosts by Paul Tremblay

I had hell and all problems trying to get a hold of this book – at the time of purchase it seemed in quite scarce supply in the UK, but I’d heard so many good things about it I couldn’t pass up the opportunity (god bless the second-hand booksellers on Amazon.) This is a genuinely unsettling and uncomfortable take on the Exorcist mythos, and touches on something that only occurred to me as an adult: the exploitation of a young and vulnerable woman (and it does not shy away, however skin-crawling the result, from the suggestion of sexual exploitation either.) Marjorie steps into Regan’s shoes, and the narrator – her younger sister Merry – is increasingly uncertain whether Marjorie is ill, or involved in an elaborate deception at the expense of their fraught and terrified parents. The extra layer of exploitation via the ‘reality television show’ brings the Exorcist mythos into the present day, and plays with the way we ultimately use and discard vulnerable people for our own voyeuristic entertainment. There is a strong undercurrent of sorrow beneath all the fear and panic, which elevates the narrative.

Technically, I read this in September, so I am cheating a little bit here, but it would be remiss of me not to mention it since it is very good. Set in a resolutely dystopian future Britain, the story revolved around Helen Damnation, a woman simultaneously haunted by her own failures and determined to seek revenge. Helen averts my most hated ‘Strong Female Character’ cliche in that she is obviously flawed, and those flaws inform her decisions throughout the narrative. Fighting alongside her is a motley crew of old allies and newer, younger recruits; the latter serve as a lens through which the reader is able to understand the grim reality of this new Britain; the way they relate to the older characters, who remember something of the world before, is at times quite heartbreaking. And then there’s Gevaudan Shoal…

Within The Wind, Beneath The Snow by Ray Cluley

Much like ‘A Head Full Of Ghosts’, I’ve been trying to get hold of this book for a ridiculous length of time. Luckily enough, it was released at Fantasycon by Snowbooks, along with a bunch of other excellent novellas.

I actually read this twice – once as a standalone experience, to get the proper measure of the book. The second time, I read it alongside a soundtrack of Sigur Rós songs (inspired by the author, who told me he’d written the novella whilst listening to Sigur Rós)

While Sigur Rós undoubtedly add something to the experience, it’s abundantly clear that the atmospheric heavy lifting is down to Cluley alone. The sense of utter isolation, the cold and alien land Gjerta inhabits – both corporeally and emotionally – is powerfully evoked. The story cuts between Gjerta’s childhood, affected irrevocably by the apparent suicide of her mother, and the present day; the lonely and inhospitable wilds of Greenland, the crushing pressure of constant darkness and the strange and terrifying darkteeth, which have haunted Gjerta since childhood. It’s a short read, but thoroughly absorbing and eerily beautiful.

The Race by Nina Allan

I’ve held off reviewing this because I honestly don’t know how to collate my feelings about it into a coherent piece of writing. Suffice to say, it’s an absolute triumph of a book. An interweaving of several stories connected, on the surface, by the thinnest of threads. But beneath the superficial similarities it’s clear that what they share is the same narrative heart, the same central questions asked: what is the nature of identity, and in what way can we be said to exist outside of the perceptions of others? By what measure do we define family, and what do we owe them? It’s a narrative which questions narratives, the stories we write for ourselves and others, the realities we decide upon when we come to know and understand another person.

It’s also about fiction, and the way it so frequently intersects with reality: the layers in every story ever told, which peel back and reveal the truths contained within. And there are so many clever ideas beneath the metafiction: genetically engineered racing greyhounds who form a symbiotic relationship with their ‘runner’, a London viewed through a slightly skewed lens, recognisable but tangibly different. I’m rambling, but that’s only because I can’t really find the words to recommend this enough. Just do yourself a favour and read it.

One thought on “What I’ve read in October (so far)”