Everyone else is doing a Fantasy Con retrospective so while the bandwagon is rolling, I thought I’d hop briefly on. Let the storm of name-dropping commence…

Work commitments meant I sadly had to miss the Friday, and apparently public transport was in on the grand conspiracy because, thanks to a raft of train delays, I ended up arriving at 2.30 Saturday afternoon – missing both Adam Nevill’s launch for Lost Girl AND the super secret ‘alternative’ launch for Jim McLeod Must Die (fortunately, some clever soul was smart enough to film the moment Jim was presented with the book – including a frankly very endearing show of emotion from the beardy ginger one himself. So pleased to have been a part of it!)

I bumped into Mark West pretty much straight away, which was a real stroke of luck – I had anticipated a lot of aimless wandering and wide-eyed staring at people I didn’t know. Fortunately Mark is a very kind chap, and was happy to let me tag along to the next panel – my first of the con: a lively and insightful discussion about British horror past and present.

The rest of the day was a blur. Exhausted from the journey and more than a little strung out on the adrenaline of unfamiliar social territory, I found myself chatting to people left, right and centre. Old friends, people I’d previously only met on Facebook, and some completely new faces as well. It can be a little intimidating trying to fit into an environment in which people already mostly know one another, especially when you’re relatively new to the writing world, and honestly, I was very apprehensive to begin with. But if there’s any kind of cliqueyness and exclusivity in this community, I am yet to discover it. Everybody I met was welcoming, open and relaxed, and so many people greeted me as though we’ve been friends for years.

I went to Priya Sharma’s reading, where I had the good fortune to hear a story of hers I hadn’t read before. I bumped into James Everington here, who I had previously seen moderating the British Horror panel (and doing a superb job). Later on, I went to the Skein and Bone/Aickman’s Heirs launch. The atmosphere was wonderful, and then this happened: 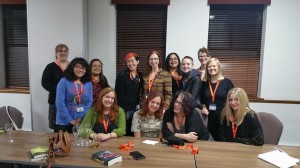 Some seriously talented ladies (minus Cate Gardner, who absolutely should be here) plus my fuzzy egg head for good measure. I got to meet the utterly delightful Carole Johnston for the first time, and exchanged brief and terrified words with Helen Marshall. I’d already met Lynda Rucker, Victoria Leslie and Rosanne Rabinowitz before but it was no less of a pleasure to be in their company.

I met so many amazing people on Saturday that I know I will inevitably miss someone out, so I’m loathe to name names (and if I do forget you, it’s not personal, I have a brain like a colander.) Suffice to say that hugging Jim McLeod, variously nattering with/alarming Paul Feeney, having my hair complimented by Stephen Volk, panelling with Nina Allan (who absolutely made my day when she told me she’d enjoyed The Grey Men), chilling with Trevor Denyer and spending time with Gary Couzens, Martin Owton, Phil Sloman, Tom Johnstone, Sara Jayne Townsend, Roy Gray (representing TTA press), and the eternally lovely Steve Shaw were all highlights. I retired to my hotel, crawled into bed and crashed out before midnight. What a lightweight.

Sunday, then, and any nervousness I may have felt on Saturday was multiplied tenfold. In all honesty, I had gone into the awards expecting nothing, but it’s hard not to be slightly terrified as the awards drew closer. Thankfully, the nerves were offset by the calming and very pleasant presence of Priya Sharma, who I suspect was the only thing keeping me sane throughout the banquet! We were joined by the First Couple of Horror, Simon Bestwick and Cate Gardner, an incredibly talented and bloody lovely pair of people. Also on the table was Ray Cluley and his partner Jess, and Carole Johnstone, both of whom were award-nominated and probably as nervous as I was. Roy Gray and Audrey were also there, and we were unexpectedly joined by a woman whose name I can’t remember (colander-brain, so sorry!) but who was very welcome, a real pleasure to spend the afternoon with. (I was also introduced to Alison Littlewood via Steve Shaw and managed not to implode in a shower of total hero worship. Go me.)

I discovered that no matter how well-prepared you think you are, there is no nervousness quite comparable to that felt when your name is read out as a nominee. A tiny part of you wonders – could it be me? I’m not going to pretend you don’t feel a tad deflated when someone else is named the winner, because you do. But it passed quickly. I was nominated twice, and I’ve only been a published author since 2013. I count it as an amazing achievement, and the fact that people consider my work good enough to shortlist – well, no matter what happens from here, I will always have that. And I’ll keep reminding myself of this whenever impostor syndrome kicks in, as it often does.

Before I left for home, I was lucky enough to meet Adam Nevill, who in a real act of kindness went out of his way to retrieve me a copy of Lost Girl. And while I waited for my cab, I was kept company by Robert Shearman (always a delight) Adele Wearing (complete with amazing fox accessories and award) and Alexandra Benedict, who I hadn’t previously met, and who turned out to be very lovely indeed. (Also on the Sunday, I managed to get in a drive-by hello to Mark Morris, Kit Power, and to Simon Marshall-Jones and his lovely wife Liz.)

It’s been almost a week and my memory is already starting to go fuzzy around the edges, so my eternal apologies to anybody I may have forgotten to mention. Thank you, everyone, for making a nervous, dorky little person’s con so much fun, and for taking me under your vast collective wing. I’m finally starting to feel like I belong here.

One thought on “Fantasy Con for Beginners and the Socially Awkward”