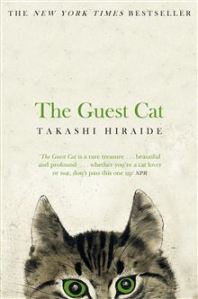 The Guest Cat by Takashi Hiraide

A total change from what I usually tend to read, this is the story of a couple living in Tokyo and their encounter with a wilful little cat named Chibi. Chibi seems to belong to the people next door, but as cats do, ‘adopts’ the narrator and his wife as her second family. There’s little in the way of plot in The Guest Cat but it really doesn’t matter; this isn’t a beginning-middle-end kind of story but a beautifully recounted slice of a life, a quiet retrospective of a moment in time that meant a lot. Wonderfully described, from the vividly-painted Tokyo surroundings to Chibi herself, a small cat packed with personality, I read the whole thing in one sitting – and from a cat-lover’s point of view, it’s always a little gratifying to see someone so completely won over by the unbending nature of these animals.

Some slightly longer pieces of fiction on offer this month, with my highlight being Priya Sharma’s The Absent Shade – a dark, bleak and beautifully written tale of betrayal and slow-burning revenge, of the confused love between a boy and his nanny in the midst of a family crumbling to pieces, and of the pettiness of jealousy. As always, Sharma’s prose is sharp and precise; not a word is wasted. And despite everything, I felt a very real sense of sorrow at the (perhaps deserved) fate of Thomas.

Also in this issue – ‘Going Back To The World’ by Simon Avery, a well-written, slightly surreal tale focusing, in part, on the unlikely partnership struck up between a woman and her ex-husband’s mistress in the wake of said ex-husband’s somewhat mysterious death. That Avery skirts around the usual monster-story tropes is to his credit, and makes for a much more interesting tale. Jackson Kuhl’s ‘The Fishers of Men’ is a solid story with an interesting concept which, for me, ended a little bit too abruptly. Catherine Tobler’s ‘Sweet Water’ is a short but effective piece of fiction, completely conscious of its own inspiration and laced with a dark humour which works brilliantly. And Tyler Keevil’s ‘Samhain’, while perhaps a little too conventional for my personal taste, is nonetheless a good story – and the encounter with the three strange boys was effectively chilling in its ambiguity. Definite shades of Stephen King here. 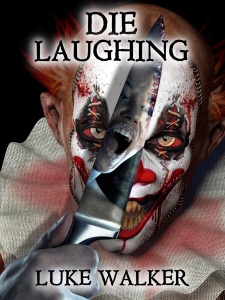 Horrible cover aside (I’m a coulrophobe) Die Laughing is a thematically mixed bag of horror stories. From the brilliantly improbable (“The Unmarked Grave”, in which a mystical doorway leading to Jack the Ripper-era London provides a bizarre backdrop to an effectively emotional story) to the short sharp shock (“Neighbours”, an uncomfortably plausible take on noise pollution, nuisance neighbours and a man on the edge.) Other strong offerings include “Upload”, in which a woman finds herself being filmed by an obsessed man – her anger and shame and powerlessness are powerfully described, and her stalker’s passive pity-me shtick is horribly recognisable. “The Approaching Darkness” deals with the arrival of a stranger in pre-Thatcher England, who appears one night in a quiet pub and claims to know the future. The story evokes the paranoia of a country on the brink of change, and the desperate lengths we will go to in order to save the ones we love. And “They Always Get Inside In The Films” is an emotive, claustrophobic take on the well-worn zombie apocalypse genre. As is often the case with short story collections, not everything is to my taste – “Static” is a tad abstract for me – but with such a wide range of subject matter and takes on the genre, I’d wager there’s enough in here to keep most horror fans happy.

2 thoughts on “what I read in February”